LOAD ONE ACHIEVES A GAME-CHANGING DECREASE IN CLAIMS

After installing the Driveri® camera system, Load One saw a dramatic 59% reduction in claims. Year two was even better, with an impressive 82% decrease in claims. Using the cameras as a tool to build a proactive safety program, Load One has maintained their rep- utation for enhanced safety, along with lower claim levels, for nearly five years running.

2016 saw claims continue to rise with the growth of the company. The average amount of individual claims rising combined with skyrocketing verdicts was continuing to drive the cost of insurance higher. That’s when Load One decided it was time to install in-cab cameras. But not just any camera. They wanted the most technologically advanced option — one that would not be obsolete in a few years.

Load One’s forward-thinking leadership have long been early adopters of new technologies, citing that they like to explore the “bleeding edge.” Artificial Intelligence, Machine Learn- ing, and Edge Computing made Netradyne’s Driveri® solution stand out from the pack. 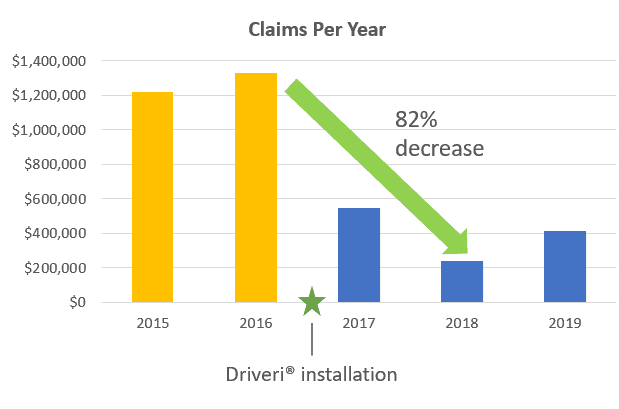 While exploring options, they were well aware of negative perceptions about cameras among their drivers. They knew if they were going to implement safety cameras, they needed a positive, driver-friendly approach. With that in mind, Load One demonstrated the positive outcomes that Driveri could create, including how it showcases and re- wards safe choices.

Once drivers recognized that the system balanced coachable situations and proactive behavior, drivers quickly came around. “When drivers realize that we’re trying to protect them and help their careers, it’s really a bit of a game changer,” says John Elliott, Load One’s CEO. “They want to be part of some- thing that is safe and positive, and to see that the company genuinely cares about them.”

We wanted a next-gen platform that wouldn’t be outdated quickly. We also wanted a product that embraced our overall mindset of being a positive, driver-friendly, safety-oriented company. The Netradyne platform represented all of that for us.

Load One values transparency, and they share all the safe- ty data with both drivers and senior management. “The numbers don’t lie,” says Jerry Schmalz, Director of Fleet & Safety. “The number of driving alerts aligns with the number of accidents and claims.” Which in turn, aligns with insurance premiums.

With over 500 drivers, the company must find ways to pri- oritize driver coaching. Schmalz says they lean on Driveri’s GreenZone score to see who needs extra attention. They also select areas of concentration for each month, such as speeding, based on the alert trends.

Schmalz says they decided to grade on a curve, using the average GreenZone score as their threshold, rewarding those above it and counseling those below it. “We think it’s fairer, as it matches the FMCSA score.”

Load One integrated the Driveri app with their own app, so drivers can view the camera alerts, comments, and self-coaching features alongside updates from headquar- ters. They also decided not to implement inward-facing cameras nor audible alerts. They found that their drivers were improving and maintaining those improvements simply by referencing the coaching, scores and rewards from the app. How else has their workflow improved? Access to fast, objective data has been key. Schmalz says, “There were a number of times we sent a video to the driver to show to an officer at the scene. Factual data whether good or bad – it’s best to do it immediately. It takes the mystery out.”

The improvement in our fleet scores and safety numbers have continued to rise. It’s a combination of training, equipment, but honestly, the single biggest factor has been the Netradyne platform.

Michigan-based Load One is one of the three largest premium transportation and expedite companies in the United States. Their asset-based fleet, third-party services, and blended solutions offer their customers unparalleled options to succeed. Their technology, equipment, and operations combined with some of the very best and brightest people have fueled Load One’s steady growth.